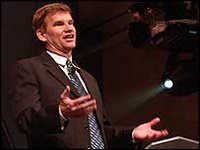 The Competitors
Ted Haggard is the former anti-gay Pastor and leader of an Evangelical organization of 30 million people. He snorted some meth (evidently one can snort meth, I checked) and had some of that gay sex with a male prostitute. Oops.

Mark Foley is a former Congressperson from Florida, who co-wrote legislation implementing harsh punishment for child molesters. He resigned from Congress for writing sexually charged emails to boys, who were young enough to be 'Nsync fans and not automatically deemed effete. Plus, he probably had sex with a couple of them. Then he entered a rehab program for a fictitious case of alcoholism. Yikes.

The Competition
So, which is worse?

Let me first say that both make me ejaculate a little. Not because elicit explicit detailed stories of drug-induced manlove and cyberpedophilia turn me on, but tales of hypocritical horrible men make me quite stiff and misty. Hey, everyone has fetishes.

Think about this: if Ted Haggard was anything but an anti-gay activist, then there wouldn't be any problems with him having the gay butt sex. He could have all of the gay butt sex he wanted and I'd be cool with it. Jesus would be too (I asked him, he's part of the Secret Jewish Conspiracy email club). In which case, the only things he would've done wrong is snorting meth, paying for sex, and committing adultery. But he was an anti-gay activist, so the hypocrisy part of the gay sex is wrong.

Mark Foley was also a hypocrite. If he had just said that child molestation was ok, he wouldn't be a child predator AND a hypocrite, just one of those. Also, The HarazQuack Times is ready to officially call Mark Foley a child-fucker, due to intensive research of the instant message conversations between Mr. Foley and congressional pages that clearly indicate there was some touchy-feely involved.

Email ThisBlogThis!Share to TwitterShare to FacebookShare to Pinterest
Labels: fp

Do we really all win, since large numbers of people chose those two as leaders, or do they just get some weird sort of reprieve?

a reprieve's as good as a win in this case