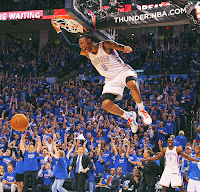 The common perception of Russell Westbrook is that he was a pillar of athleticism and possessed unlimited potential in the wake of the Oklahoma City Thunder's first round exit in the 2010 Playoffs. But he became a selfish, shot-happy player in the 2011 NBA Playoffs and that has carried over to this season.

The problem with Westbrook during the 2011 playoffs wasn't that he shot too much. The problem was he took too many bad shots. There were too many possessions where he was the only one who touched the ball and he wasn't able to get an open shot. His 39.4% field goal shooting that postseason shows the poor shots he's was taking. His assists per game during the '11 playoffs were actually higher than in '10. He's having a great postseason this year, but he gets two fewer apg during the '12 playoffs than he did during the '11 version.

In fact, he averaged three fewer assists per game during the this regular season than he did during last season. But that isn't an indication that he has become a more selfish player. it shows his shifting role on the Thunder. In 2010-11, Westbrook averaged 8.2 apg, Durant 2.7, and Harden 2.1. That totals 13 apg from those three. This season. Westbrook averaged 5.5, Durant 3.5, Harden 3.7. That totals 12.7, almost the same amount as last season. So, it's merely a case the role of initiating the offense has spread out between those three.

Westbrook doesn't have the court vision or passing ability of Paul, Parker, or Rondo. But remember, he played off the ball in college and he's been a pro for only four seasons. His field goal percentage, scoring average, and team's win percentage have improved each of his professional seasons. And he's only 23 years old.

He hasn't missed a game during his career, is a highlight waiting to happen, and will simply continue to get better for years to come. I'd rate the other star point guards ahead of him at this point, but they're all older than he is. He's not yet a top ten player, but he will be soon. I'd bet it won't take more than two or three years.
Posted by knibilnats at 11:16 PM